HOW TO ARRIVE AT SAN SIRO STADIUM San Siro Stadium (also known as Giuseppe Meazza Stadium) Via Piccolomini 5 20151 Milan, Italy Located about 5 Km from the center of Milano. Popular Train routes and approximate traveling time. I suggest you arrive to the train station 1 hour in advance in case of full schedule, or long line, or if you are carrying heavy suitcases. Hey, anyway, you will have a fun time at the train station listening Italian and grab a cup of espresso and a panino.

Serie A tickets for the next 10 games 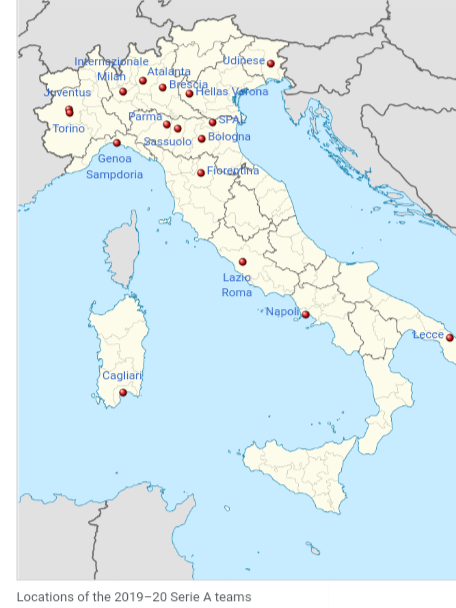 Torino Football Club sacking Coach Walter Mazzarri on Tuesday 4 February 2020.  Mazzarri was appointed on 4 January 2018.  The decision to fire Mazzarri is followed after two bad defeats: Serie A Week 21, Torino 0 – 7 Atalanta and Serie A Week 22, Lecce 4 – 0 Torino.    The new Coach will be former Frosinone Coach Moreno Longo who is also an a former Torino defender.    Longo led Frosinone to promotion to Serie A in 2018.

“President Ubrano Cairo and coach Walter Mazzarri, after a thorough analysis of the current situation, have decided to end their professional relationship.

Torino Football Club announces therefore the consensual resolution of Walter Mazzarri’s contract. The Club wishes to thank the coach and all of his staff for the commitment, fairness, and professionalism shown in these last two years.”