✅  Here are the match officials and fixtures for the Serie A Week 2 / Second Round on  Saturday 20, Sunday 21, and Monday 22 August 2022 as designated by the Italian Referee Association (AIA).

🇮🇹 The Italian Referee Association (AIA) has designated the match officials for the Serie A Week 2 game Inter vs Spezia on Saturday 20 August 2022 at the Giuseppe Meazza Stadium in Milan, Italy at 20:45. 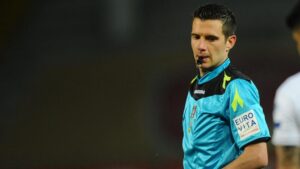 👉Jacobs Europe’s Champions
The King is back

👉Juve, another one out
Adductor injury for the Argentine: risk one month stop

👉Schuurs and Lukic with Lazio

👉Depay Juve
Agreement!
Di Maria from the show to the stop: 20 days

👉Disturbing data
Foreigners are 7 out of 10
And the talents run away
Serie A: 67% of the lineups are foreigners after Round 1 pic.twitter.com/4Yq4RmKsj4

Hello, my friends. Here are the 2022-2023 Italian Serie A Week 1 Results / First Round on Saturday 13, Sunday 14, and Monday 15 August 2022.  We are set for a thriller season and see whether AC Milan will defend their Scudetto title from last season or whether we will have a new Champion.   The main challengers debuted with a victory: Juventus, Roma, Inter, Atalanta, and Napoli.   A flop for the 3 teams promoted from Serie B losing their games: Monza, Lecce, and Cremonese.

Up to Week 1 the Race for the Scudetto

AC Milan inaugurated the 2022-23 Season defending their title. Milan defeating Udinese after being one goal down in San Siro. AC Milan win their first three points. In the next round, Udinese will play at home against Salernitana while Milan will play away against Atalanta at the Gewiss Stadium.

Mission accomplished! AS Roma start the season with an away victory defeating Salernitana. Salernitana never drew on their Serie A debut; after a home win against Lazio in 1947, the granata lost to Roma in 1998 and to Bologna in 2021.

Lecce returning to the Serie A after their promotion from Serie B. Yet, a sour debut losing at the Via del Mare Stadium. Inter grabbed this important away victory in the agonizing 95th minute with the goal by Denzel Dumfries.  In the next round, Lecce will play the away match against Sassuolo, Inter will play at home against Spezia.

Monza making their debut after being promoted from Serie B. Monza lost to Torino at the U-Power Stadium. We might argue the defeat is not that bad considering that “Dany Mota” scored Monza’s first historic Serie A goal and will be always remembered. The goal arrived in the 94th minute.

Hellas Verona with a sour home defeat crushed by Napoli. The final score is Verona 2 – 5 Napoli, Kevin Lasagna and Thomas Henry scored for Verona and thus found the first goal in the league this season. For Napoli, the goals scored by Kvaratskhelia, Osimhen, Zielinski, Lobotka and Politano, the VAR cancels a goal in Ounas. Verona lose two season debuts in a row from the 1989-1999 period (four in that case).

Lazio defeated Bologna at the Olimpico di Roma Stadium with a perfect comeback. Lazio were down 0-1 in the first half, overturns the result thanks to De Silvestri’s own goal and Ciro Immobile’s goals. Lazio winning for the first time four consecutive opening debuts. Lazio played with 10 players since the 6th minute after Referee Luca Massimi gave a red card to Luís Maximiano for a handball. Bologna also got a red card in the 45th minute after Adama Soumaoro got his second yellow card. In the next round, Lazio will play the away game against Torino while Bologna will play at home against Hellas Verona.

Juventus defeated Sassuolo at the Allianz Stadium. Juventus with a superb performance, two goals from Dušan Vlahović, a goal and assists for Ángel Di María with a successful debut. However, there is some concern for the conditions of Di Maria, substituted for a muscle problem, and Zakaria. Juventus is the team that has beaten Sassuolo several times in Serie A including this one: 14 Juventus wins, three draws and Sassuolo 2 wins.

Fiorentina defeated Cremonese “promoted from Serie B.”   The victory arrived in the 95th minute with the own goal by Ionut Radu breaking the draw.  Fiorentina won 3-2.  A total boost for the Viola.

Atalanta defeated Sampdoria at the Luigi Ferraris Stadium. A slap for Sampdoria losing at home while Atalanta grab this important away victory to kick off the start of the new season.

👉 Results from Serie A Week 1

– NAPOLI, 1st position with 3 points and a positive goal difference of +3

– JUVENTUS, 2nd position with 3 points and a positive goal difference of +3

– AC MILAN, 3rd position with 3 points and a positive goal difference of +2

– ATALANTA, 4th position with 3 points and a positive goal difference of +2

– FIORENTINA, 5th position with 3 points and a positive goal difference of +1

– INTER, 6th position with 3 points and a positive goal difference of +1

– SAMPDORIA, 18th position with 0 points and a negative goal difference of -3

– HELLAS VERONA, 19th position with 0 points and a negative goal difference of -2

– SASSUOLO, 20th position with 0 points and a negative goal difference of -3