Udinese ending the Serie A Week 8 game with a draw against Bologna on Sunday 17 October 2021 at the Dacia Arena in Udine, Italy.  Udinese were down by a goal and managed to get at least 1 point in the 83rd minute with the equalizing goal by Beto. Udinese reaching 9 points and Bologna 12 points.

✅ Udinese and Bologna have drawn their last three Serie A matches and have not reached four in a row in the competition since 1997. Bologna’s last success against Udinese in Serie A dates back to September 2018, with Filippo Inzaghi on the bench – two Friulian wins and three draws since then. Udinese have lost only one of their last 12 Serie A matches at the Dacia Arena against Bologna (6W, 5D), a partial in which in 50% of the matches they kept a clean sheet (6/12). Udinese have lost seven of their last 10 league games at the Dacia Arena, a partial in which they missed the appointment with the goal six times – only one success in the partial, against Venezia in August (2N). Bologna scored at least 11 points in the first seven Serie A matches of the season only for the second time in the last 15 championships (also in 2017/18, when they also won the eighth, against SPAL).
Bologna have not won a Serie A away game since last March, 3-2 against Crotone – since then they have recorded three draws and four defeats, including the last two, in which they have conceded 10 goals.

It is Bologna to open the score in the 67th minute. Musa Barrow defeating Udinese goalkeeper with a right footed shot to the bottom right corner. The assist is by Nicolás Domínguez following a corner conceded by Marco Silvestri.

👉Udinese 0 – 1 Bologna, 67th minute, goal by ⚽️ Musa Barrow for @BolognaFC1909en with a right footed shot to the bottom right corner. The assist is by Nicolás Domínguez following a corner conceded by Marco Silvestri. https://t.co/BsSsFKTiF2

Udinese equalizing for the 1-1 in the 83rd minute. It is Beto to save a point defeating Bologna goalkeeper Silvestri from very close range with a headed shot to the bottom left corner. The assist is by Ignacio Pussetto.

👉Udinese 1 – 1 Bologna, 83rd minute, goal by ⚽️ Beto equalizing for @Udinese_1896 from very close range with a headed shot to the bottom left corner. The assist is by Ignacio Pussetto.https://t.co/s46Do3d3SR https://t.co/CofBrPy8QS 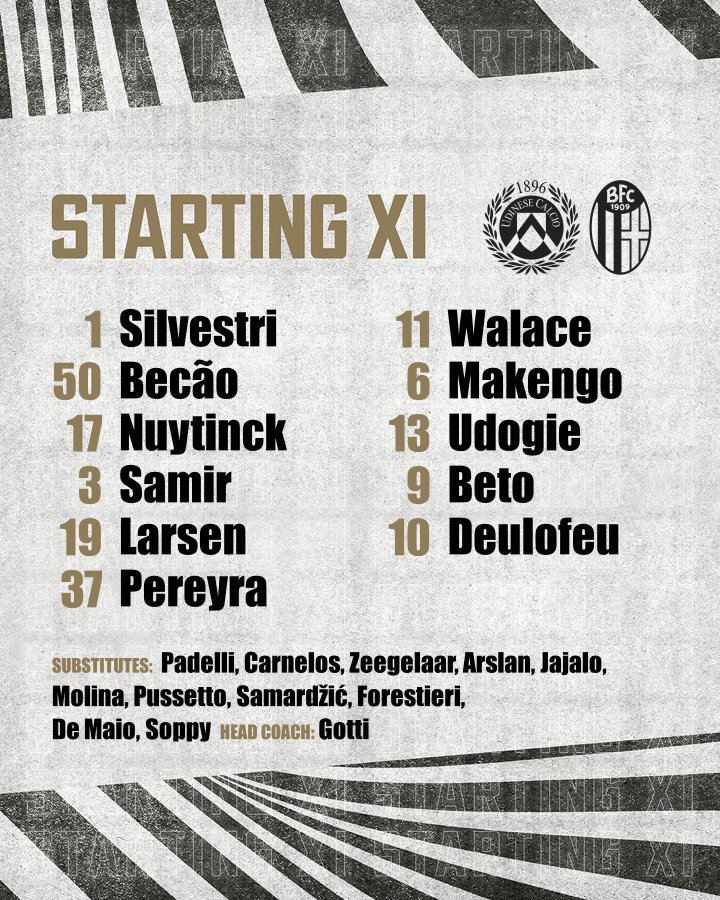 Sent off: A’ Pereyra (for double yellow cards)