A vain draw.  Fiorentina players wearing black armbands in memory of former Fiorentina player Aldo Scaramucci, who passed away recently. Born in 1933, Scaramucci spent four seasons with the Viola between 1954 and 1958.  Scaramucci was part of the squad that won the 1955/56 Serie A title and he played in the 1957 European Cup final against Real Madrid.

The absence of forward Giuseppe Rossi clearly missed for the Viola.   Torino starting the game with clear intention to dominate.  In the 2nd minute the assist by midfielder Migjen Basha to forward Alessio Cerci challenging with a left footed shot Fiorentina goalkeeper Norberto Neto  who saves in the bottom right corner.

Fiorentina reacting in the 8th minute.  Midfielder Matias Fernandez seeing a chance to score with a right footed shot though Torino goalkeeper Danielle Padelli saves in the bottom right corner.

In the 20th minute, Torino closer to the goal with the assist by midfielder Migjen Basha to forward Cerci challenging Fiorentina goalkeeper Norberto Neto with a left footed shot only to be saved in the bottom left corner.

Torino attempts to score in the 40th minute. A headed assist by Paulo Barreto to forward  Cerci delivering a right footed shot though saved by Fiorentina goalkeeper Norberto Neto in the bottom left corner.

No suspended players for FIORENTINA

Here are the last 3 games of FIORENTINA:  3 wins 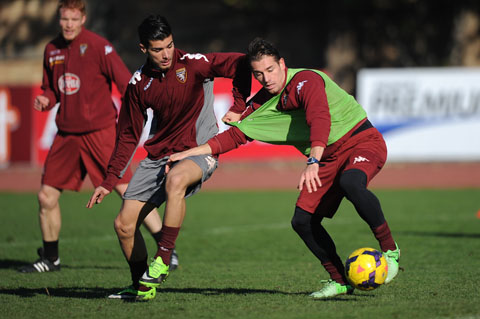