Livorno battling for salvation while Parma looking to climb towards the top 6 positions.  Surprising seeing Coach Roberto Donadoni leaving forward Antonio Cassano as a sub as rumors increasing about a possible transfer.

Surprise, surprise, Parma silencing the Armando Picchi Stadium in the 2nd minute.  Yep, an assist by Jonathan Biabiany to forward Raffaele Palladini catching the ball on the air with a left footed shot defeating Livorno goalkeeper Francesco Bardi in the bottom right corner.

Stats before the game seeing Livorno collecting only 1 point in the last 7 games and scoring only 3 goals.  Up to them to change the stats or succumb.

Referee Irrati giving the first yellow card of the match in the 30th minute to Parma defender Alessandro Lucarelli for a foul on Livorno forward Leandro Greco.

Towards the end of the first half, Livorno attempting to equalize in the 42nd minute.   Paulino with a right footed shot challenging Parma goalkeeper Mirante who saves in the bottom left corner.

Livorno returning stronger in the second half.  In the 47th minute, it is a combo move between Paulinho and Siligardi challenging goalkeeper Mirante … though no goal yet.

Livorno closer to the goal in the 75th minute with Emerson challenging Parma goalkeeper Mirante with a left footed shot though saved in the top center.

Parma making their last substitution in the 84th minute. Forward Raffaelle Palladino replaced by Gabriel Paletta playing his 100th game in Serie A.

Say no more, Livorno in deep problem.  Parma increasing the score in the 86th minute.  It is forward Amauri to defeat Livorno goalkeeper Bardi with a right footed shot in the center.  Immediately celebration from Amauri lifting his arms to the sky.

Making matters worst….. in the 92nd minute Referee Irrati giving a penalty to Parma conceded by Livorno defender Emerson for a foul on defender Pedro Mendes.

Taking the penalty spot is Amauri!…. Yep, and you guessed it right…. Amauri converting the penalty with a right footed shot defeating goalkeeper Bardi in the bottom right corner.  Amauri running to celebrate towards the section of the fans rooting for Parma. 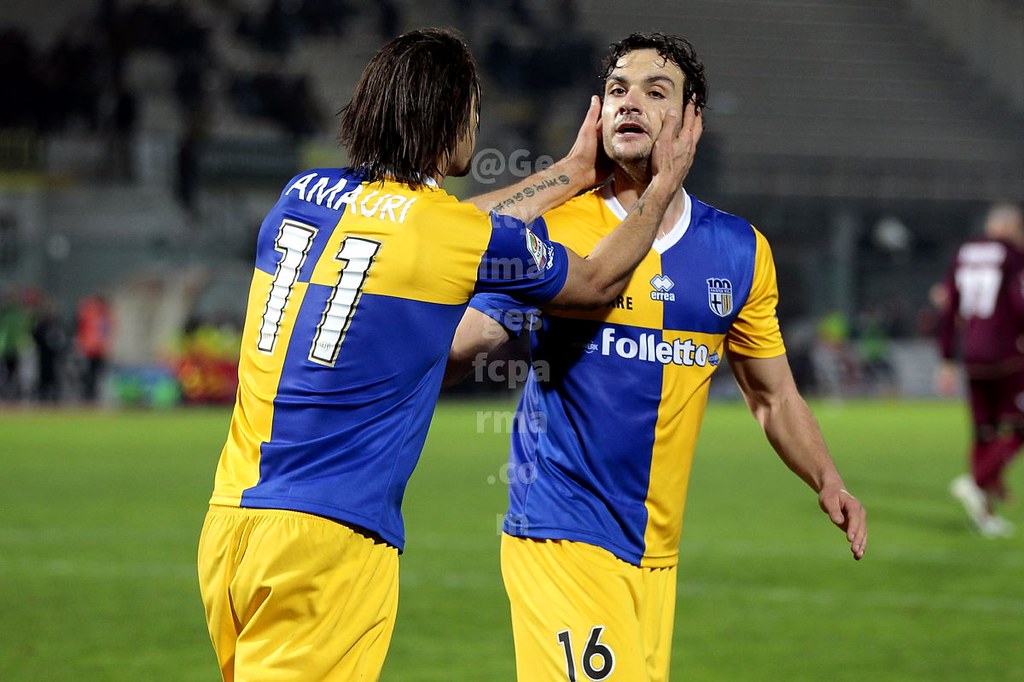 Click the video to watch the highlights of the match, Livorno vs Parma, Saturday 11 January 2014, Armando Picchi Stadium, Livorno, Italy, Serie A Week 19