Italian Soccer Serie A blog by Anna Italia congratulates all 9 Italian Serie A players represented in the World Cup Final game,  for Germany vs  for Argentina National team  on Sunday 13 July 2014 at the Estadio do Maracana in Rio De Janeiro, Brazil.  It’s the  third meeting between Argentina and Germany in a World Cup final winning one each. Curiously, it is also the third World Cup final going to extra time now…..  Congrats to Germany winning the World Cup after 24 years! Germany have won now 4 World Cup trophies just like Italy.

Players making their way to the pitch and this is high tension!!!! What a moment!  I have goosebumps…   National anthems playing first Germany…. I feel so proud to watch Lazio forward Miroslav Klose there !!!!!    Turn for Argentina anthem, wow, I cannot describe the joy to see our Serie A Players  in the lineup all Napoli rooting for Gonzalo Higuain and the ex Pocho Lavezzi!!!   Lucas Biglia … faces with a solemn look as knowing what this game mean…. players now shaking hands.

Closeup  from Germany Captain Philipp Lahm and Argentina Captain Lionel Messi shaking hands before the game.  This is it guys, Referee Nicola Rizzoli whistles the start of the game… showtime!!!!  Let’s roll the ball… grab your snacks and enjoy the game….  Rizzoli is the third Italian referee to direct a World Cup final!

In the 4th minute, Argentina quickly reacting counter attack and there you see Napoli forward Gonzalo Higuain so close to the goal missing his right footed shot not by much to the left..

There you see now running fast forward Lionel Messi from the right side almost side by side with Germany defender Mats Hummels …. Messi taking the lead and the fans rooting… final effort blocked by Germany midfielder Bastien Schweinsteiger…..

In the 14th minute Germany with a direct free kick….. and cleared by defender Pablo Zabaleta

Match delay in the 18th minute… Germany midfielder Christoph Kramer  injury.  Still on the ground getting medical attention….  leaving the pitch and … back… Kramer will continue.

Mamma mia.. hello, hello, in the 20th minute, Higuain all alone and missing his right footed shot when it was almost a granted goal… he cannot believe his luck and neither do I !!!!  Fans now increasing their support for Argentina….

In the 27th minute Germany closer to the goal but the linesman indicating an offside.

In the 28th minute, Referee Rizzoli giving the first yellow card of the match to Germany midfielder Bastian  Schweinsteiger on Argentina forward Ezequiel Lavezzi bringing him down.

Mamma mia, hello, I am about to collapse… Argentina scoring with Gonzalo Higuain awesome goal, but clearly being offside.  What a luck!  Higuain was already celebrating running with teammates but the flag was already lifted… 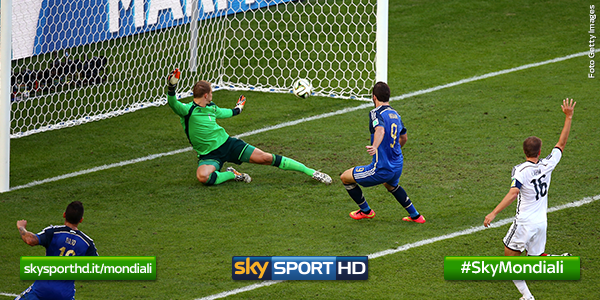 There it is Higuain scoring while Germany defender Philipp Lahm lift his hands to indicate it is offside too.

In the 32nd minute, the first forced substitution is for Germany because after all Kramer cannot continue and is leaving the pitch with signs of a swollen face and is replaced by midfielder Andre Schurrle.

Things getting complicating and Germany seeming to lose control. In the 34th minute another yellow card.  This time Rizzoli booking defender Benedikt Howedes after a foul on Argentina defender Pablo Zabaleta.

In the 43rd minute the action starting  with the assist by Mesut Ozil  midfielder Tony Kroos a long right footed shot and goes direct to the hands of Argentina goalkeeper Sergio Romero in the center…..

In the 44th minute a clear and present danger for Argentina when forward Miroslav Klose  was closer but not arriving on time for a headed shot….  Klose cannot believe it and laments it.

Wow, what a match… in the 45th minute out of a corner kick , there it is  Kroos with the shot finding a fast Benedikt Howedes for the   headed shot but hitting the post!!!!!  The ball still in the area, Thomas Muller gets the rebound but in offside position…….

Argentina starting the second half with a substitution replacing forward Ezequiel Lavezzi with forward Sergio “Kun” Aguero” in the 45th minute.

Oh my gosh!!  So close and the crowd cannot believe it.  In the 47th minute forward Lionel Messi was all alone and the clearest chance to score, but unexplainable his left footed  shot missing the target to the left!  Messi with a gesture of total disbelief now!

Match delay i the 56th minute when Germany goalkeeper Manuel Neur anticipates  to block the attempt to score by Gonzalo Higuain.  Neur pushing the ball away with one hand but on the action clashing with Higuain falling on the ground..

In the 59th minute, the headed shot by forward Miroslav Klose from the center is saved by goalkeeper Sergio Romero with both hands in the top left corner….

In the 64th minute, referee Rizzoli giving a yellow card to Argentina midfielder Javier Mascherano after a foul on forward Miroslav Klose

Nervous is becoming a key factor.  Another yellow card for Argentina in less than 2 minutes.  Rizzoli giving a yellow card to forward Sergio Aguero after a foul on Germany midfielder Bastien Schweinsteiger.

In the 71st minute Germany missing a clear chance to score  with André Schürrle failing to control the ball and his right footed shot goes wide to the right….

Argentina now missing in the 75th minute and Lionel Messi cannot  believe his luck! Messi dribbles to make space but not able to control the ball for a final shot missing the target.

Another wasted chance.  In the 82nd minute, Germany midfielder Tony Kroos all alone gets the assist by Ozil, but to his dismay, Kroos missing the target to the right ….

Argentina forward Gonzalo Higuain leaving the pitch while his teammate Demichelis encourage him.

In the 87th minute, Germany replacing Lazio forward Miroslav Klose leaving the pitch among the ovation of the fans.  I am just crying seeing Klose, I have been his admirer for ages!!!!   Klose greets referee Rizzoli on his way out.  Well done Klose.  It is forward Mario Gotze to replace Klose.

We are going to extra time……..

In the 91st minute Argentina goalkeeper Sergio Romero saving with both hands the right footed shot by André Schürrle who got the assist by  Götze.

In the 92nd minute, following a fast break Palacio providing the assist to forward Sergio Aguero though missing his left footed shot to the right!!!! Fans are just in disbelief, so many chances and the goal still not arriving.

High tension!!!!  In the 93rd minute, Argentina forward Rodrigo Palacio had his chance to score but could not define the final shot while goalkeeper Neuer anticipates….. off target… Palacio cannot believe it!!!

And say no more… the goal arriving in the 113rd minute with Germany forward Mario Gotze  scoring the winner goal with a mega goal accommodating the ball first with the chest and then smacking the shot defeating Argentina goalkeeper Sergio Romero!!!!  The immediate celebration among players and Germany fans in the stadium waving flags, chanting and this is just party time……

Germany making the last substitution in the 120th minute replacing Mesut Ozil with defender Per Mertesacker.

Game over… Referee Nicola Rizzoli whistles the end of the game and the 2014 FIFA World Cup Winner is GERMANY.

Note: Goalkeeper Sergio Romero is a Sampdoria player on loan to Monaco.

At the Maracana’ Matthaus vs Daniel Passarella

Germany and Argentina fans before the game.

What do you think of the result?