Brazil and Colombia battling for the pass to the Semifinals and it is Brazil to pass to the Semifinal.  Germany already qualified to the Semifinal after defeating France.   Highlight of the match all 6 Italian Serie A players called up for Colombia are in the official lineup: Zuniga, Zapata, Yepes, Guarin, Cuadrado, and Ibarbo.   Moreover the Captain of the Colombia National team is Atalanta defender Mario Yepes.  Brazil calling up 3 Serie A players having only 1 in the lineup: Roma defender Maicon.  There are 9 Italian Serie A players called up in the game Brazil vs Colombia valid for the World Cup Quarterfinals on Friday 4 July 2014 at the Estadio Castelao in Fortaleza, Brazil at 17:00 local time.

Brazil opening the score in the 7th minute with the ex AC Milan defender Thiago Silva defeating Colombia goalkeeper David Ospina with a left footed shot in the bottom right corner.  The assist is by forward Neymar  following a corner conceded by Colombia defender Cristian Zapata.

It’s goal.. just look at the ball almost passing through the net to the other side… 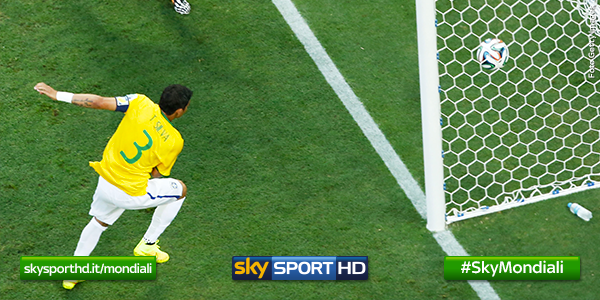 Second half starting with a substitution.  In the 45th minute Colombia replacing Victor Ibarbo with forward Adrián Ramos

First yellow card of the match in the 64th minute is for Brazil defender Thiago Silva after a foul on Colombia goalkeeper Ospina.  Thiago will not play in the Semifinal now.

Colombia scoring in the 67th minute, but the linesman had lifted the flag indicating offside.   The goal by Yepes is not valid.

Brazil increasing the score from a mega direct free kick in the 69th minute with defender David Luiz smacking a powerful right footed shot forcing Colombia goalkeeper Ospina to a super stretch attempting to stop with one hand, but nothing to do.. the ball went inside just like a missile.

Colombia players in the barrier attempting to block David Luiz shot, but could not.

Referee Velasco giving a penalty to Colombia in the 78th minute conceded by Brazil goalkeeper Julio Cesar after a foul on forward Carlos Bacca.  Cesar also getting a yellow card.  Taking the penalty spot is James Rodriguez and without a problem, ignoring the pressure, slams a left footed shot in the bottom left corner defeating goalkeeper Julio Cesar who went to the other side.  It’s the 6th goal for Rodriguez in this World Cup.

Brazil goalkeeper committing the foul on Bacca resulting in the penalty.

In the 86th minute Brazil replacing Paulinho with midfielder Hernanes.

Things complicating for Brazil as Neymar cannot continue… he is on the ground after Colombia defender Juan Camilo Zuniga committed a foul from behind on him, apparently, Zuniga kneed on Neymar’s lower back and had to leave the pitch on stretcher and replaced by Henrique in the 88th minute.  Neymar with visible pain…

This is it.   game over.  Referee Velasco whistles the end of the game.   Standing ovation for Neymar Jr. pulling Brazil bandwagon and to James Rodriguez a top footballer batting for Colombia and scoring 6 goals in this World Cup.   Excellent sportsmanship at the end of the match David Luiz and Alves comforting James Rodriguez Oficial crying after the defeat.  Luiz and Rodriguez exchanged shirts.  Well done.

Class act. Super gesture with Brazil defender David Luiz consoling his rival James Rodriguez at the end of the game. 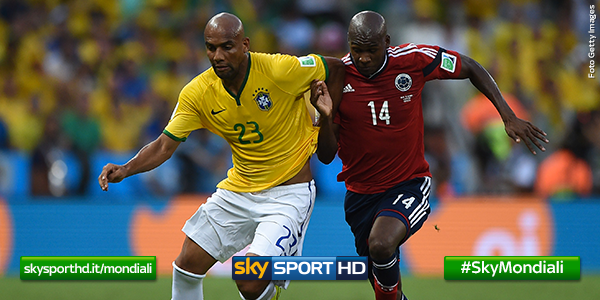 Two Serie A players in action.  Brazil and AS Roma defender Maicon  challenged by Colombia and Cagliari midfielder Victor Ibarbo.

2 Serie A players dueling in opposite teams.  Brazil and AS Roma defender Maicon and Colombia and Cagliari midfielder Victor Ibarbo.