Lazio win the Serie A Week 29 game defeating Venezia on Monday 14 March 2022 at the Olimpico di Roma Stadium in Rome, Italy.  The victory helps Lazio to climb to the 5th position while Venezia remain in the relegation zone.  Lazio ahead of Atalanta and Roma. Venezia against the fourth consecutive penalty continue to postpone the victory, despite a tactically dignified match. On Week 30, Lazio will play the derby against AS Roma while Venezia will play for safety in the direct clash against Sampdoria.

President Lotito and Giorgio Sandri delivered a plaque to the Wilson family before the game.

👉 In memory of Pino Wilson, President Lotito and Giorgio Sandri delivered a plaque to the Wilson family on Monday 14 March 2022. https://t.co/8oAiIUKUCI

Lazio opened the score in the 58th minute. Forward Ciro Immobile defeating Venezia goalkeeper Mäenpää converting a penalty with a right-footed shot to the bottom left corner. The penalty was conceded by Domen Crnigoj. Immobile has scored his 26th goal in 33 games in all competitions for Lazio this season and become the top scorer in the history of Lazio, with 144 goals!

👉Lazio 1 – 0 Venezia, 58th minute, goal by ⚽️ Ciro Immobile converting a penalty for @OfficialSSLazio with a right-footed shot to the bottom left corner. The penalty conceded by Domen Crnigoj. https://t.co/64n5KJblLa

144 – Since he joined Lazio (2016/17), Ciro #Immobile has scored 144 goals in Serie A: as many as Cristiano Ronaldo in the Big-5 European Leagues in the period and fewer only than Messi (164) and Lewandowski (185). Uncontainable.#LazioVenezia pic.twitter.com/AT3eIT7DZe

✅ Stats before the game. Lazio have remained unbeaten in their last four matches against Venezia in Serie A (3W, 1D), winning the two most recent; LLazio have never obtained three successes in a row against the lagoon in the maximum tournament.  Lazio have never lost in their 10 home games against Venezia in Serie A (8W, 2N); among the teams currently in the tournament, only against Empoli have the Biancocelesti played more home matches (12) without ever registering a defeat.  Lazio have only won two of their last seven league home games (3D, 2L), after having recorded 17 wins in the previous 19 Serie A home games (2D).  Venezia have won three away matches in this league (3N, 7P); in their history in Serie A, only in 1942/43, Venezia have achieved more away wins (four) in a single season.

Ciro Immobile, in addition to joining Silvio Piola in 1st place of Lazio’s top scorers in Serie A (both 143 goals), became the 3rd player in the entire history of the competition to score at least 20 goals in six different seasons, after Gunnar Nordahl and Giuseppe Meazza (both seven).  Ciro Immobile has scored 43 goals in 46 matches against newly-promoted teams in Serie A; since 2000, only Alberto Gilardino (47) has scored more goals against these opponents in the top flight.

Lazio team arrived at the Olimpico for the game against Venezia. https://t.co/ByRUeOKjWn

👉 Here is the Pino Wilson’s band that will be worn by @ciroimmobile tonight for the Serie A Week 29 game Lazio vs Venezia at the Olimpico di Roma Stadium. https://t.co/eYlNGbcFdw 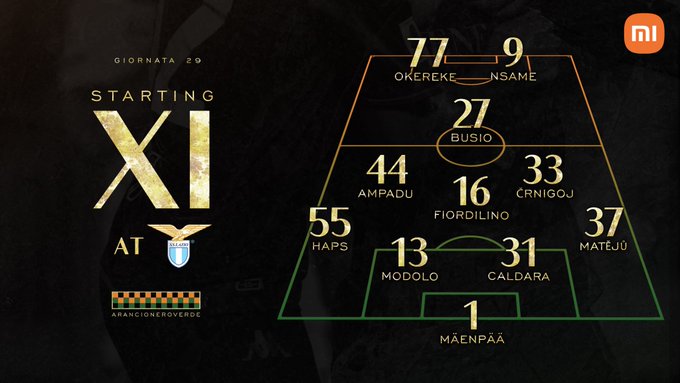