AC Milan failing to win this home game hoping to climb the Serie A table while Torino causing an upset in San Siro with this draw.  Milan were looking for the third consecutive win with Seedorf.   On Week 3 the game at the Olimpico di Torino Stadium ended: Torino 2 – 2 AC Milan

Cold water in San Siro in the 17th minute!  Following a fast break, Torino opening the score following a fast break seeing defender Emiliano Moretti making the assist  towards the left side to forward Ciro Immobile defeating AC Milan goalkeeper with a right footed shot in the bottom right corner.

Immediately, AC Milan reacting in the 19th minute with a goal opportunity!  First the action started by Kaka passsing the ball to Robinho who attempts a right footed shot seeing it blocked.  The action still going with forward Giampaolo Pazzini attempting an overhead kick with a right footed shot and is miraculously saved by Torino goalkeeper Daniele Padelli in the center.

Second half starts without changes…

There you go…. the equalizer goal in the 49th minute. The assist by midfielder Sulley Muntari to French defender Adil Rami defeating Torino goalkeeper Padelli with a right footed shot in the bottom left corner… though it seems there is a slight deviation by Torino defender Kamil Glik.  Rami running towards the bench to celebrate with defender Philippe Mexes.  French power in action.


Milan scoring in the 59th minute with forward Robinho getting the assist by Kaka.  Yet, immediately, Referee Damato ruled out the goal for offside.  Robinho cannot believe his luck!

De Jong seeing his right footed shot saved in the 64th minute by Torino goalkeeper Padelli in the center.

In the 77th minute, a clear chance for Milan and it is wasted.  Free kick by midfielder Riccardo Montolivo missing the target not by much!!!

In the 89th minute, the last change for AC Milan.  It seems a desperate move by coach Seedorf to find the winner goal.  Substitution for fresh energy in the attack.  Forward Andrea Petagna replacing forward Keisuke Honda.

Nothing to do… the changes did not work and the game ending with a 1-1 draw.

Click the video to watch the highlights of the game, AC MILAN vs TORINO on Saturday 1 February 2014 at San Siro Stadium in Milan, Italy for the Serie A Week 22 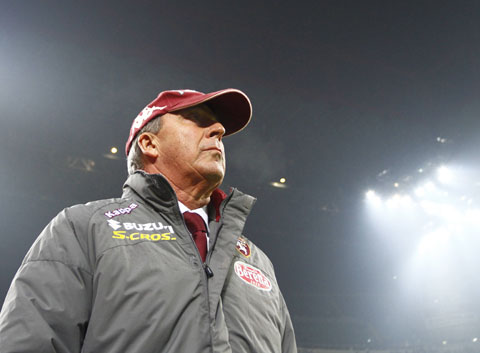 Torino coach Giampiero Ventura maybe wondering that they had it so close, yet, Milan managing to equalize.

Adil Rami running to celebrate after scoring the equalizer goal