🇮🇹  Italy Head Coach Roberto Mancini called up 39 players for the five games in fifteen days.  The players will meet on Friday 27 May 2022 at the Federal Technical Centre.  Italy’s journey in the third edition of the UEFA Nations League will start at Via Emilia and consists of a four-match program in June with their final two matches scheduled for the end of September: after reaching the Final Four last year, which was hosted in Milan and Turin, the Azzurri finishing third.  Italy are in the UEFA Nations League A – Group A3 with England, Germany, and Hungary.

Mancini has selected all the Azzurri who were part of the European championship winning squad at Wembley last July (with the exception of the injured Chiesa, Castrovilli, Toloi and Immobile). After the serious injury he picked up against Belgium in the European quarter-final match, Leonardo Spinazzola returns to Azzzurri contention. First call-ups to the senior national side for Andrea Pinamonti and Davide Frattesi, while Gianluca Caprari, on the other hand, rejoins the national team three and a half years after being called up in October 2018, for the games against Ukraine and Poland.

The Azzurri will begin proceedings once again at the iconic London Stadium, on Wednesday 1 June (20:45 CEST, live Rai 1) they take on Argentina, a match in which the reigning European champions go head-to-head with the winners of the last Coppa America. An exhilarating battle is on the cards, renamed the ‘Grand Final’, which was agreed as part of the Memorandum of Understanding, signed last December by UEFA and CONMEBOL. 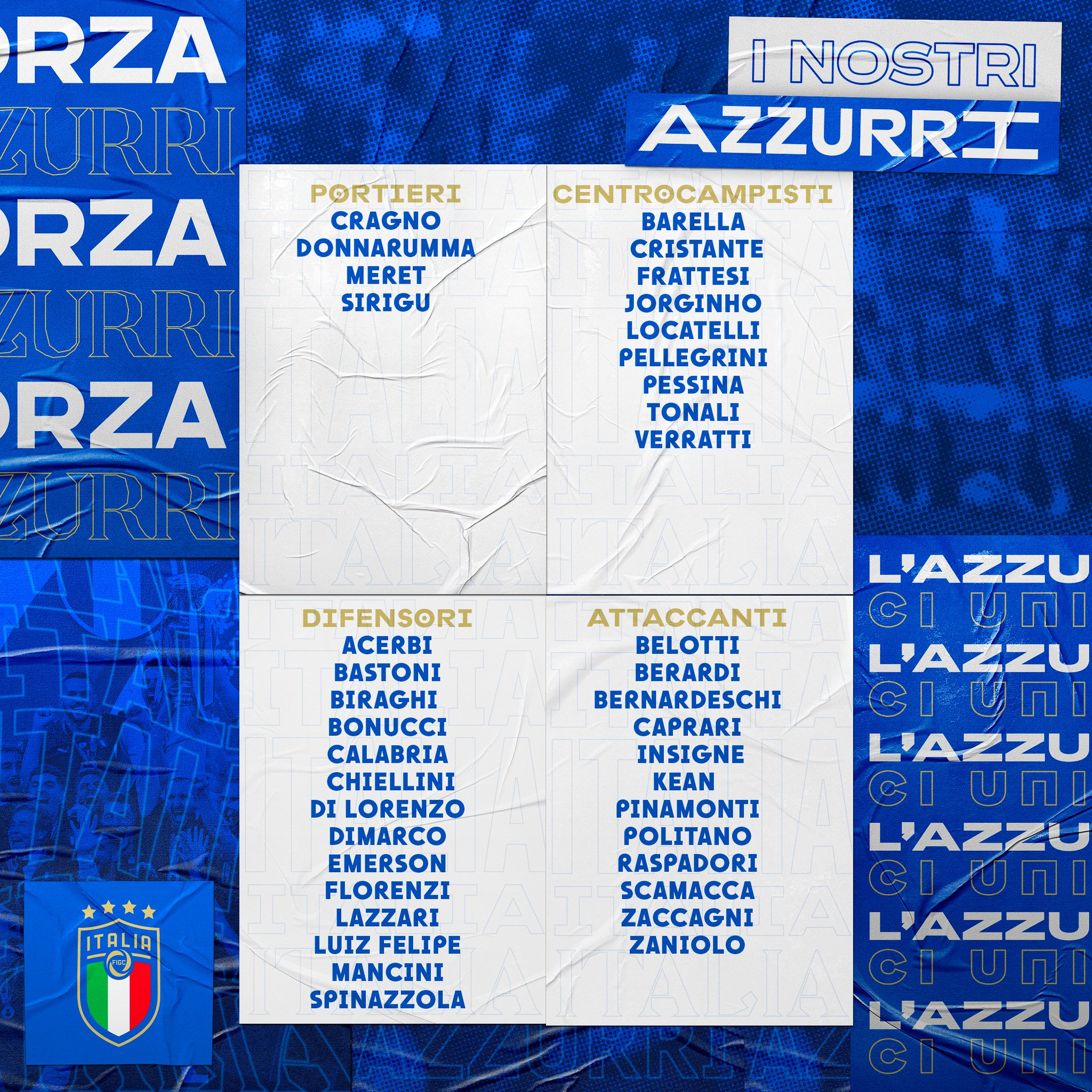 ITALY V ARGENTINA. The Grand Final, created last December 15, will see Italy take on Argentina, as the European champions take on Coppa America champions. The match will be played on Wednesday 1 June, with kick-off at 20:45 CEST (Italian time) at Wembley Stadium. There will be no extra time; in the event of a draw after 90 minutes, the winner will be decided via penalties. This will be just the third time ever that the winners of the Euros have played Coppa America champions, in a match organized by UEFA and CONMEBOL: in 1985, France beat Uruguay 2-0 in Paris, while eight years down the line, Argentina defeated Denmark on penalties in Mar del Plata. The two sides have met on 15 occasions: the Azzurri running out winners in 6 of these, 5 draws and 4 defeats.

THE NATIONS LEAGUE 2022/2023. The third edition of the UEFA Nations League will start in June 2022, while the Finals will be played in June 2023. As was the case with the 2020-21 edition, in this year’s instalment, leagues A, B and C all have 16 teams, which were drawn into four groups of four for the league phase. The remaining seven teams, in League D, were split into two groups, one of four and the other of three. In all cases, teams will play all their group opponents home and away in June and September 2022. Four of the six matchdays will be in June due to the winter scheduling of the 2022 FIFA World Cup. The four group winners in League A will advance to the knockout Finals in June 2023. The group winners in the other three leagues will all be promoted for the 2024/25 edition. The teams finishing fourth in the groups in Leagues A and B will be relegated. The teams finishing fourth in the League C groups will enter the play-outs in March 2024, with the two teams defeated in those ties moving to League D. The opening game for Mancini’s Italian side will be on 4 June in Bologna against Germany; then, Italy v Hungary (7 June in Cesena), England v Italy (11 June in Wolverhampton) and Germany v Italy (14 June in Monchengladbach). The venues for Italy v England (23 September) and Hungary v Italy (26 September) are yet to be announced. The semifinals will be played on 14 and 15 June 2023, while the final and the third-place play-off are scheduled for 18 June.

ITALY V GERMANY. The match in Bologna will be the 39th meeting between Italy and Germany and the 23rd time that the National team have stepped onto the hallowed turf of the ‘Dall’Ara’: this promises to be yet another international football classic, a game that became legendary after the ‘Match of the Century’ in Mexico City, 1970. Italy boast the better record of the sides’ previous meetings (15 wins, 10 draws; 7 defeats) and have a lucky ground in Bologna, where they have not lost since 1989. This will be Germany’s second time at the ‘Dall’Ara’ after almost a century since their last visit (1933).

ITALY V HUNGARY. This is one of Italy’s longest records playing a fellow international side, as fixture 35 between the nations approaches. The match-up proved to be a real classic until the second post-war period, when the Hungarians competed against the Azzurri (in 1938 Italy 4-2 Hungary in the final in Paris). The Azzurri’s record against Hungary is as follows: 16 wins, 9 draws and 9 defeats (Italy scoring 63times and their opponents, 56). The national side have played on just three occasions in Romagna, at the ‘Manuzzi’ in Cesena: all friendlies won by Italy (Bulgaria, San Marino and Sweden).

ENGLAND V ITALY. These two have met 28 times prior to this fixture, with a finely balanced record, which just favours the Azzurri: 10 Italian victories, 8 for the English and 10 draws. The first times these nations met was 14 November 1934: the football masters played against the World Champions, a tournament in which England had chosen not to participate. Despite being 3-0 down in the first 45 minutes and outnumbered through Monti’s injury, Pozzo’s Italy recovered to pull it back to 3-2. However, a further 40 years would pass until the first Italian victory: on 14 June 1973 in Turin, Anastasi and Capello made history (2-0). The last meeting is by far the sweetest for Italy: victory on penalties in the Euro 2020 final, as the Wembley arch bore the colours of Italy.