It’s over. Brazil  humiliated by Germany proving to be a demolishing machine by scoring 7 goals against 1.  Yep. You are reading right, Germany defeated Brazil  not only with a historical result, but also for the historic record breaker by Germany forward Miroslav Klose becoming the top scorer in World Cup after scoring his 16th goal!  A well deserved victory for Germany showing  a tough lesson to Brazil in their own country!

Germany will play the World Cup Final against the winner of the match Netherlands vs Argentina.   There are 5 Italian Serie A players called up for this game.

It is Germany to open the score in the 11th minute silencing the stadium with forward Thomas Muller smacking a right footed shot from the center defeating Brazil goalkeeper Julio Cesar in the center despite his attempt to save with both hands.  The assist by midfielder Toni Kroos following a corner conceded by defender Marcelo.

Party starting for Germany with the celebration by Thomas Muller who silent the Estadio Mineirao with his early opening goal.

A historical moment!   Germany and Lazio forward Miroslav Klose scoring his 16th goal in World Cup!!!!  In the 23rd minute  with a right footed shot defeating Brazil goalkeeper Julio Cesar, who saved the first attempt, but on the rebound there it was Klose to finalize shot in the bottom right corner!!!! The net empty just like awaiting for the historical ball to make its way. 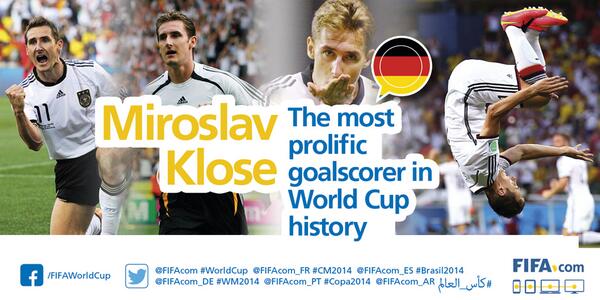 Record in the making…. Germany forward Miroslav Klose leaving a poor Brazilian defense to make his historic goal, the 16th!

This is the “historic ball” going inside the net to crown Germany forward Lazio as top scorer in World Cup games with 16 goals!!!!  Desolation among Brazil players observing the ball while goalkeeper Julio Cesar is on the ground

This is just beyond belief.  Far from Brazil reacting, it is Germany to continue shooting goals!  In the 24th minute midfielder Toni Kroos defeating Brazil goalkeeper Julio Cear with a left footed shot in the bottom left corner!!!!!  The assist by defender Phillip Lahm.  Fans are just without words and some even crying as replays showing the deception at the stadium.

Tony Kroos celebrating while his teammate Miroslav Klose also celebrating, what  a momentum!

Oh my gosh!!!!  Are we watching a World Cup game????  It’s just chaos for Brazil!  Not even 3 minutes passing and bam bam bam!  Germany  scoring  in the 26th minute again with Toni Koos defeating Brazil goalkeeper Julio Cesar in the bottom left corner!!!!   The assist is by Sami Khedira. It’s just total collapse while Germany players celebrate close up showing the sad reaction from Brazil fans and players.

And goals keep arriving!   In the 29th minute, it is midfielder Sami Khedira to increase Brazil’s headache by scoring with a right footed shot all the way to the bottom left corner. It’s a nightmare, a living hell for Brazil goalkeeper Julio Cesar and teammates.   The assist is by Mesut Ozil.

Germany players congratulating Khedira after his goal while Brazilian players seem like going to a death row, totally destroy, no soul.

Second half start with Germany making a substitution in the 45th minute replacing defender Mats Hummels with defender Per Mertesacker.

Brazil starting the second half with a substitution in the 46th minute replacing midfielder Fernandhino with midfielder Paulinho.

A deserved ovation by German fans to the great one, forward Miroslav Klose leaving the pitch in the 58th minute while substituted by forward André Schürrle.  Klose applauds back to thank the fans and greets also coach Joachin Loew.  What a historic match for Klose!!!

Germany just crushing Brazil!!! Imagine, now it is André Schürrle needing only 11 minutes after coming as a sub to score in the 69th minute  with a right footed shot leaving goalkeeper Julio Cesar with a wish to disappear!  The ball going to the bottom right corner.

And where is Brazil’s defense????

Brazil coach Luis Felipe Scolari not finding his way to revert this result and makes another substitution in the 70th minute replacing forward Fred with midfielder William.

In the 79th minute it is André Schürrle  to score his second goal in the match to make a total demolition!!!!   Schürrle with a left footed shot defeating Brazil goalkeeper Julio Cesar while the ball hits the underside of the bar to make its way inside the net in the top left corner!!!! The assist by Thomas Muller, what a moment!

The honor goal for Brazil arrives in the 90th minute with Oscar for the “consolation.”

What do you think of the result?