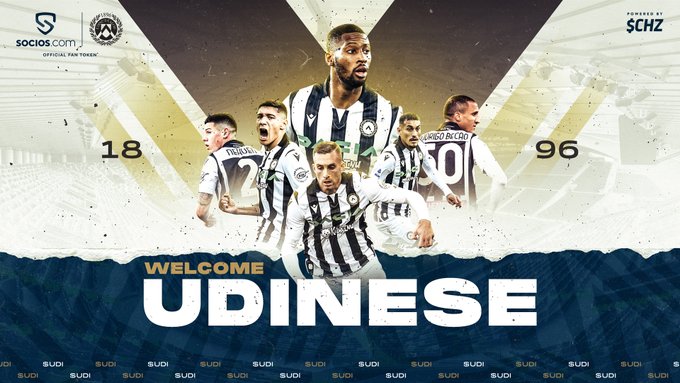 Photo via twitter.com/Udinese_1896
With a proud history stretching back over 125 years, Udinese is an important club of the Italian calcio. Founding its values on knowledge and innovation, as of today, the club has participated in 27 Serie A championships in a row, qualifying 11 times for European competition, which marks a true record for the team led by the Pozzo family.
The $UDI Fan Token will provide I Bianconeri around the world with a tool to engage with and influence the club like never before, giving them the chance to enjoy special discounts and promotions, access exclusive content and earn unique prizes and rewards, from signed merchandise to VIP tickets and once-in-a-lifetime experiences.
In addition to this, for the first time ever, fans will be able to take part in decision-making processes by voting on polls through the Socios.com app to name club facilities, choose kit designs, squad numbers for new signings, celebration songs, inspirational messages and other fan-related topics.
In 2021, Socios.com Fan Token partners launched over 300 Fan Polls on the app and rewarded 5,000 Fan Token holders with club merch, VIP tickets and once-in-a-lifetime experiences such as acting as the club’s official speaker and announcing the lineup in an official home match.
The launching date of the $UDI Fan Token as well as the subject of the first poll will be announced soon.
As part of the partnership, Socios.com will have brand visibility on the training and the pre-match warm-up kits.
Udinese Calcio joins a network of over 120 sporting organisations worldwide which have already embraced Socios.com’s cutting-edge blockchain technology to empower and enhance the experience of their fans. The roster features football giants such as FC Barcelona, Paris Saint-Germain, Manchester City, Juventus, Inter Milan and Arsenal amongst others, but also major MMA brands, Formula 1 teams, esports clubs and NHL, NFL, MLS and NBA franchises.
Alexandre Dreyfus, CEO of Socios.com, said: “Over its 120+ years of history, Udinese Calcio has built a rich legacy and nurtured a large fanbase across Italy. We are very happy to be partnering with them and excited to start working on new opportunities for their fans to connect with the team.”
“This partnership confirms our leadership in Italy, where seven of the 20 clubs currently taking part in the Lega Serie A, plus the National Team, are now partners to Socios.com. It also proves our commitment to continue expanding our footprint in this country, which has played a pivotal role in the development of our product and our brand.”
Magda Pozzo said: “The philosophy of the Club always aims at reaching new standards and the engagement of our fans is an important challenge that we have prioritized. Therefore, we’re honored that Socios.com has recognized the ambition of our vision, allowing Udinese to become a part of the global roster already on the platform. This certifies the attractiveness of the Udinese brand, as well as the efforts of the Club for its fan base.”
The partnership with Udinese Calcio further strengthens Socios.com’s leadership in Italy, where the creators of Fan Tokens are currently partners to seven Serie A clubs and the Italian National team, and where they will soon be opening their first regional offices.
The Socios.com mobile app, launched by leading blockchain provider Chiliz in 2019, is available for iOS and Android and currently hosts a growing community of 1,3 million users in 167 different countries. The company has headquarters in Buenos Aires, Istanbul, London, Madrid, São Paulo and Seoul and will very soon open its first offices in Italy and the US.
Socios.com grew by 500 percent in terms of partners and clubs in 2021, and is aiming to continue introducing millions of new fans to the benefits of Fan Tokens in 2022, with new partnerships, innovations, features and rewards to be added to the Socios.com app throughout the year.
Source: udinese.it