A total blow for Venezia losing the home game. AC Milan win  the Serie A Week 21 game gaining momentus for the Scudetto race on Sunday 9 January 2022 at San Pier Luigi Penzo Stadium in Venice, Italy.  Venezia needed the victory to keep away from the relegation zone. This is the first fixture at the Penzo since February 2002 (which ended in a 4-1 win for the Rossoneri). Stefano Pioli, celebrating his 400th game as a Serie A coach with a victory, despite having an 11-man absentee list due to injuries and players on Africa Cup of Nations duty.

AC Milan went top of Serie A with a 3-0 win over Venezia on Sunday, as defender Theo Hernandez struck twice in the second half to help his side clinch their third consecutive league victory.

AC Milan opening the score in the 2nd minute with forward Zlatan Ibrahimović defeating Venezia goalkeeper Sergio Romero from very close range with a right footed shot to the center. The assist is by Rafael Leão. Ibrahimović with a historic goal being Venezia the 80th team he has scored against in Europe’s top five leagues, a record only Portuguese forward Cristiano Ronaldo has matched since 2000.

80 – Venezia are the 80th different team against which Zlatan #Ibrahimovic has scored in the Big-5 European leagues: since 2000, the Swedish player became only the 2nd player to reach this milestone, after Cristiano Ronaldo (on December 30 v Burnley). Multiplicity.#VeneziaMilan pic.twitter.com/yUkJbAIxDH

⏱️ 3′
THAT’S THE START WE WANTED! @Ibra_official taps home to give us the lead! 💪#VeneziaMilan 0-1 #SempreMilan @EASPORTSFIFA pic.twitter.com/mRlte314hS 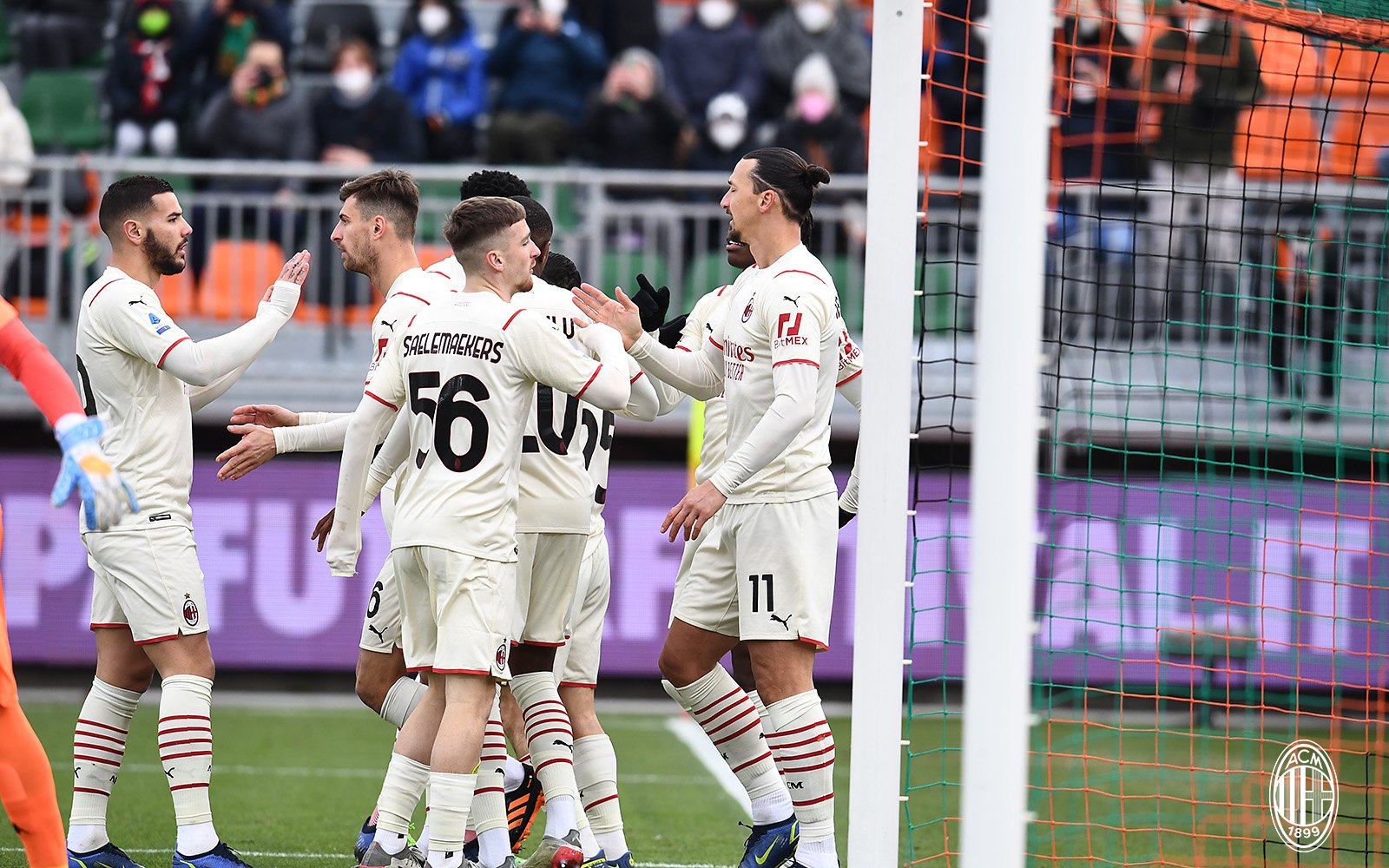 AC Milan returning in the second half determined to win the game. Defender Theo Hernández increasing the score in the 58th minute with a left footed shot from a difficult angle on the left to the top left corner. Assisted by Rafael Leão.

Chaos for Venezia sinking!  In the 58th minute, Referee Massimiliano Irrati giving a penalty to AC Milan conceded by Michael Svoboda following a handball inside the penalty area. It is  Theo Hernández to convert the penalty with a left footed shot to the top right corner. Way to go, 2 goals!

✅   Stats before the game.  This will be the 26th meeting between Venezia and AC Milan in Serie A: 15 wins for AC Milan, 4 for the Venetians, 6 draws. There have been 12 previous meetings between the two sides at Venezia’s home with AC Milan leading 7 wins to 3 (as well as 2 draws).   AC Milan have lost just one of their last 22 Serie A matches against newly-promoted teams: in the other 21 matches, the Rossoneri have recorded 16 wins, five draws with 13 clean sheets. It is also worth noting that AC Milan have won their first away game of the calendar year in Serie A in the last four seasons, including last year, against a newly promoted side, a 2-0 win at Benevento. 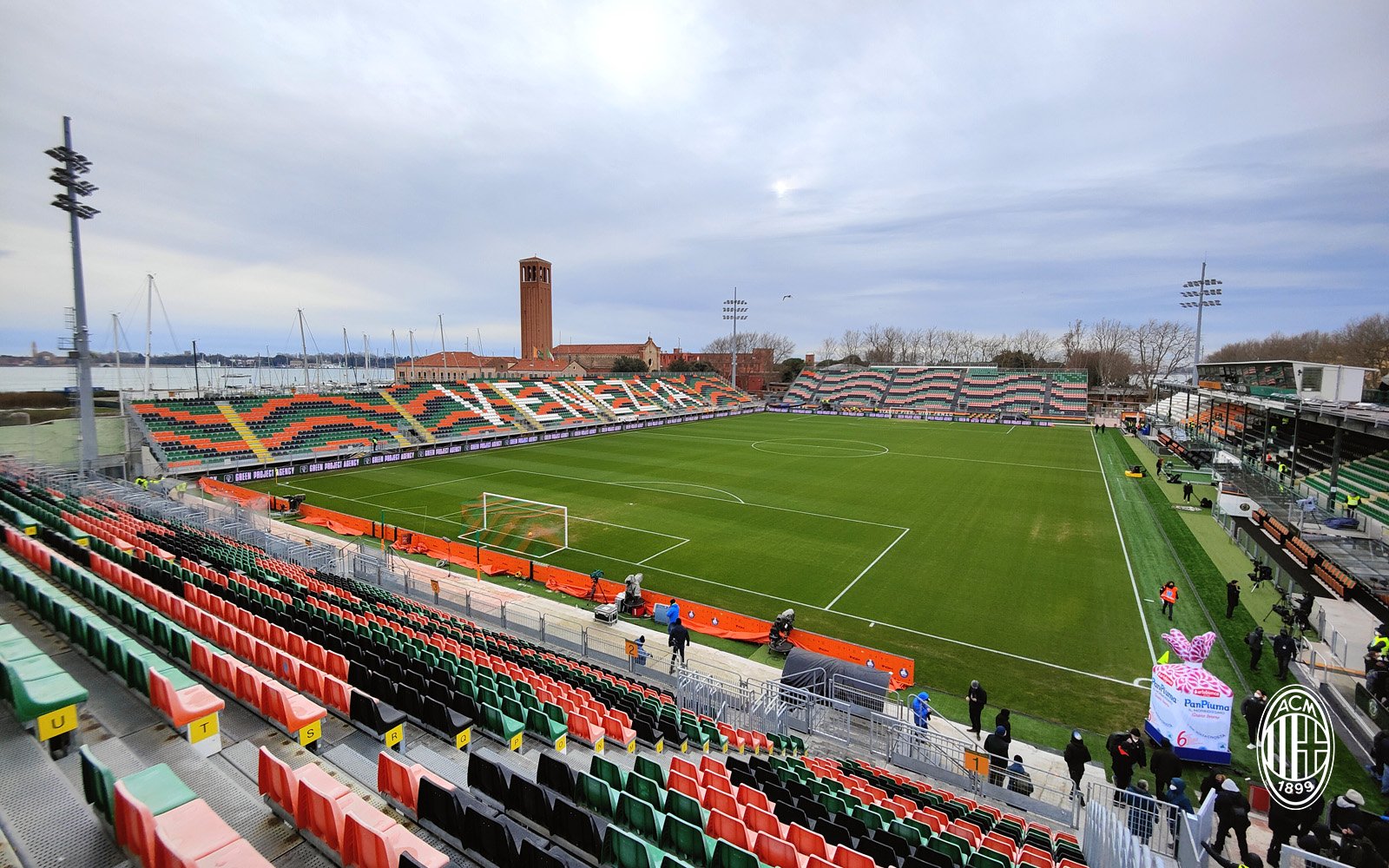 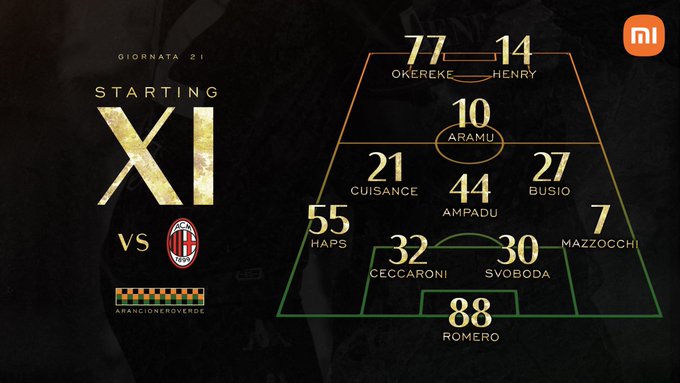 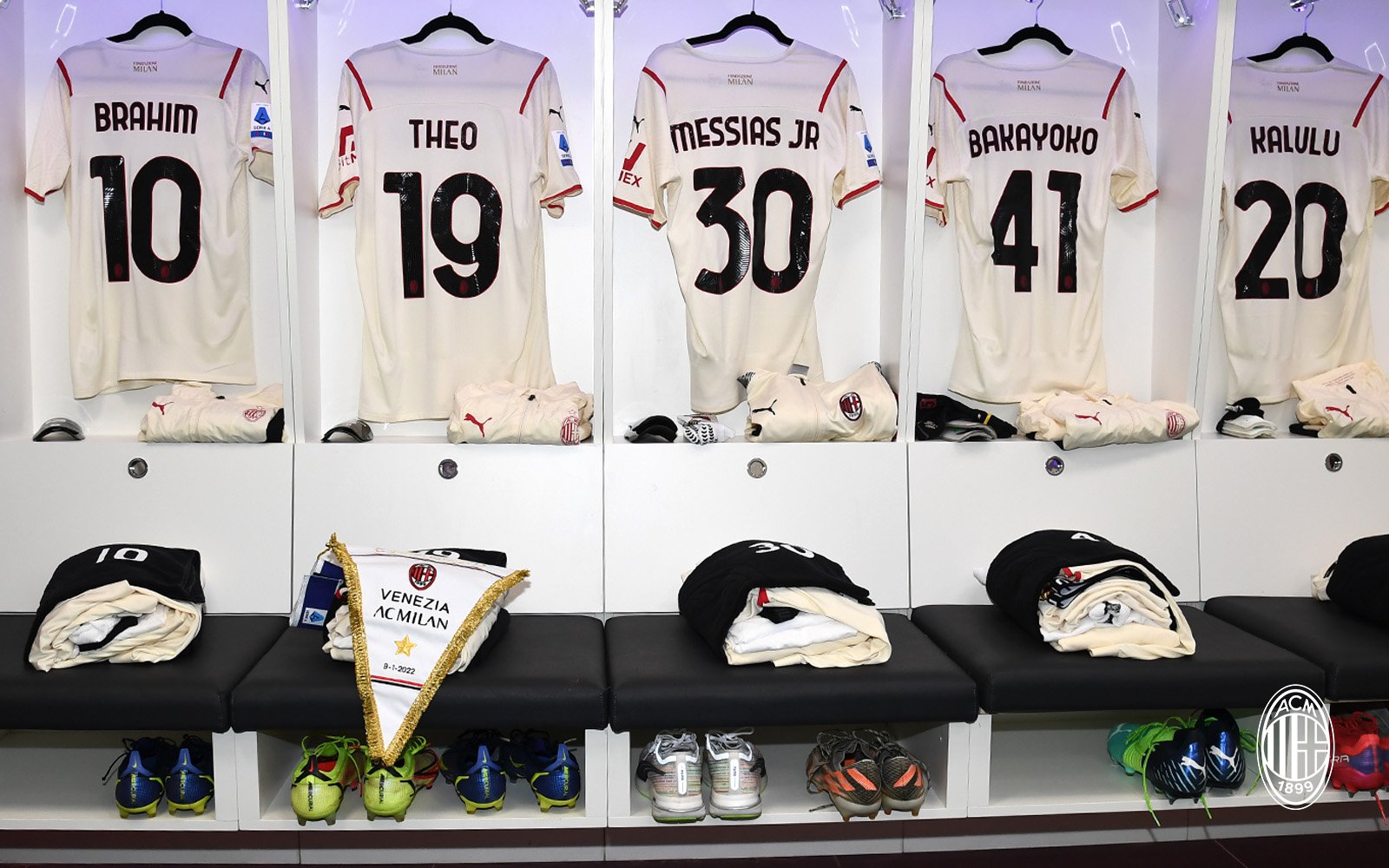 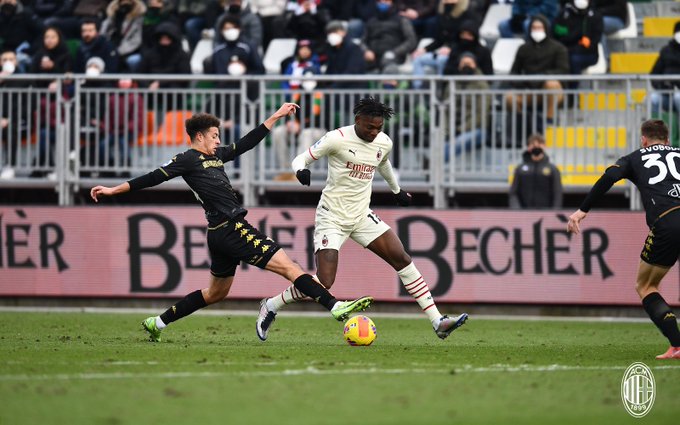 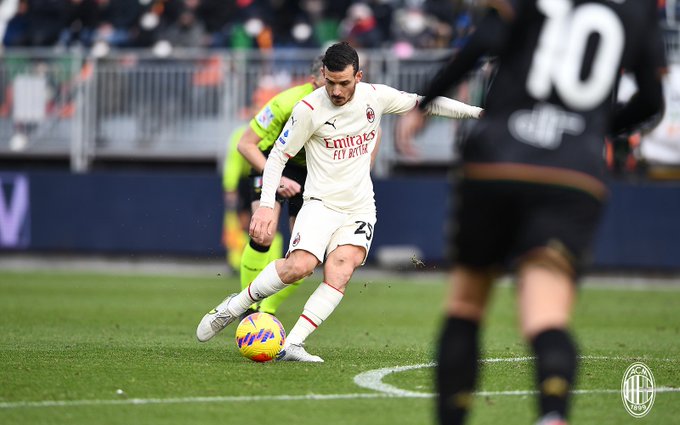 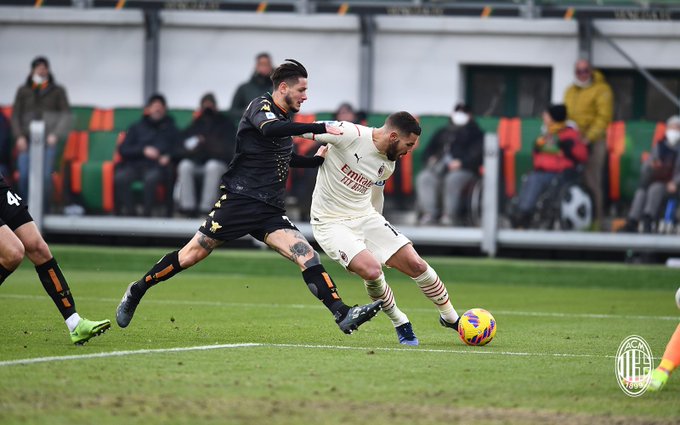 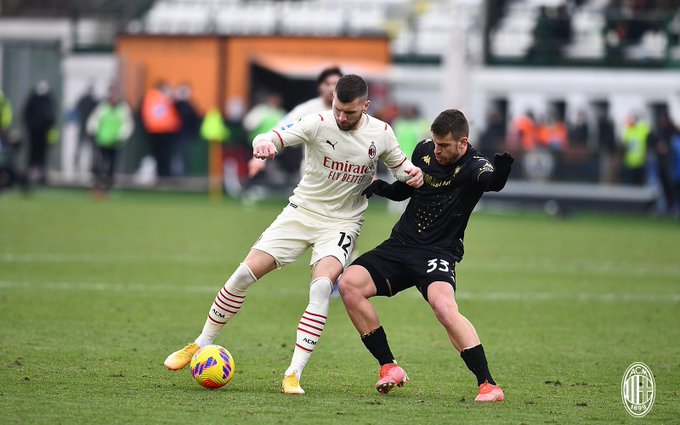 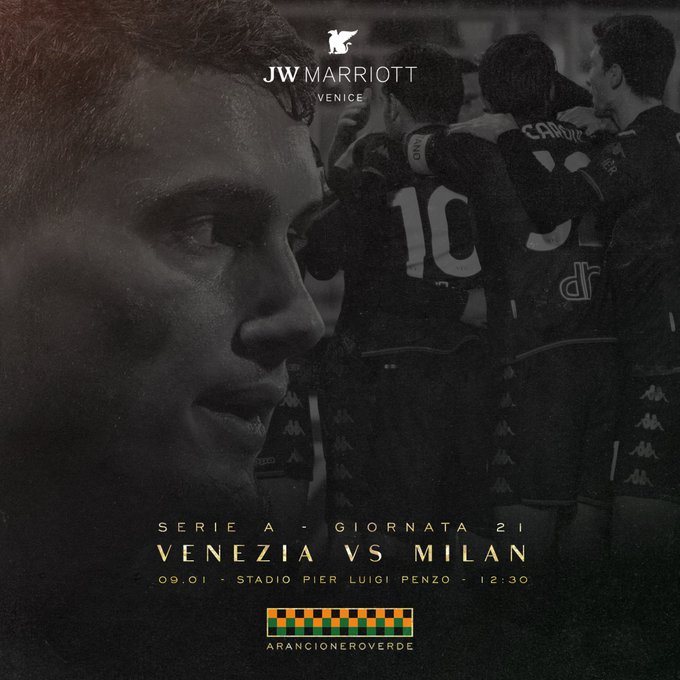