AC Milan silencing the Luigi Ferraris Stadium in the 85th minute.   It is Colombian forward Carlos Bacca to smack a goal defeating Sampdoria goalkeeper with a right footed shot in  the bottom right corner.  The assist is by Suso.  It’s the fourth goal of the season by Bacca.

AC Milan scored 14 times in the past 15 matches played away against Sampdoria, scoring a total of 25 goals.  Last 7 matches between AC Milan and Sampdoria saw the red and blacks undefeated: 3 draws and 4 victories.

There are  58 precedents at the Ferraris with stats showing AC Milan with 22 wins, 19 draws, and Sampdoria with  17 wins.  The big ex is Vincenzo Montella who played coached last season: 26 games and 14 defeats. Against Samp, Montella has a positive record: in 7 previous matches, 4 victories, 2 draws and just one defeat.  AC Milan scored in all the past 6 Serie A matches against Sampdoria winning at the Luigi Ferraris Stadium.

Stats BEFORE the game.  Top scorer of SAMPDORIA:  Muriel and Quagliarella with 2 goals each

Disciplinary Situation BEFORE the game.  1 suspended player for SAMPDORIA: Alvarez 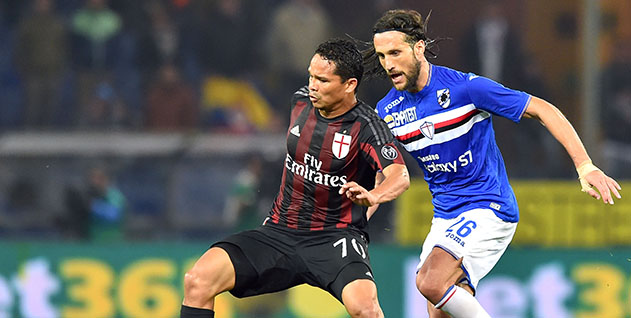