Juventus win the 2014 Derby d’Italia crushing Inter.  This match is referred as the Derby D’Italia after it was named like that by Italian journalist Gianni Brera in 1967.   A game among City rivals too as Juventus represents Turin and Inter represents Milan.

Inter still looking to win their first game in 2014.   Juventus two consecutive Scudettos and on their way to their third one….  a total humiliation for Inter at the Juventus Stadium with strong Juve….  Inter went down from the 5th to the 6th position.

Highlights of the game include Juventus defender Giorgio Chiellini will play his 400th match as a professional footballer. Chiellini has played for Livorno, Fiorentina and Juventus, clocking up 251 Serie A appearances, 79 in Serie B, 24 in the Coppa Italia, 42 in European competition and three in other tournaments. He made his debut on 12 August 2001, in Palermo 3-0 Livorno (Coppa Italia).

The Olimpico starting the party in the 15th minute!.  There is the opening goal by Juventus defender Stephan Lichtsteiner  defeating Inter goalkeeper Samir Handanovic with a headed shot in the bottom left corner.  The right footed assist by midfielder Andrea Pirlo.  It’s the second goal this season for Lichtsteiner.

And there you go, what a way for Chiellini to celebrate his 400th professional match!!!! In the 47th minute, Chiellini defeating goalkeeper Handanovic with a right footed shot in the bottom right corner.  An error by Inter defender Yuto Nagatomo unable to stop the ball going n after to midfielder Arturo Vidal and then passing to Paul Pogba for the final touch set for Chiellini.   Fans now crazy and you bet coach Antonio Conte also celebrating!

In the 55th minute, the third goal for Juventus and this seems like crushing Inter alive.  Vidal defeating goalkeeper Handanovic with a left footed shot in the bottom left corner.  Vidal celebrating by making the gesture of the heart with his hands.

Inter with a substitution in the 58th minute with midfielder Danilo D’Ambrosio replacing midfielder Jonathan.

A forced substitution for Juventus in the 63rd minute.  Defender Andrea Barzagli is injured and replaced with defender Martin Caceres.

Inter shortening the distance in the 72nd minute.  Defender Rolando defeating Juventus goalkeeper Marco Storari with a left footed shot in the bottom right corner following a corner.  This at least is the honor goal.

In the 82nd minute, Juventus replacing defender Stephan Lichtsteiner with Mauricio Isla.  Lichtsteiner leaving the pitch among the ovation by the fans thanking him for his goal. 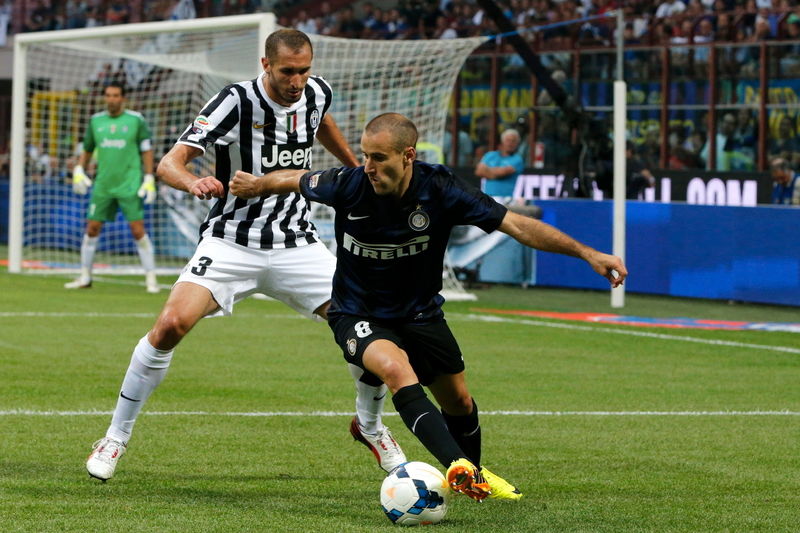 Click the video to watch the highlights of the match, JUVENTUS vs INTER, Sunday 2 February 2014, Juventus Stadium, Turin, Italy