Inter with the pressure to win this home game to climb to the 4th or keep the 5th position.   Bologna with the pressure to win the away game to avoid falling in the relegation zone.   Inter president Eric Thohir watching the game from the Tribune.  General stats in favor of Inter out of the 135 games between Inter-Bologna, Inter having 64 win, 39 win Bologna.  Yet, Inter have defeated Bologna only once in the last 4 games.  Previously, Bologna have defeated Inter in the last 2 games at the Meazza.

Inter opening the score in the 6th minute.  An assist by defender Yugo Nagatomo with a cross to forward Mauro Icardi defeating Bologna goalkeeper Gianluca Curci with a left footed shot in the center.  It’s the 5th goal this season for Icardi.

Surprisingly, Bologna equalizing in the 36th minute silencing the Meazza.   The action starting with the first attempt by midfielder Lazaros Christodoulopoulos challenging Inter goalkeeper Samir Handanovic with a right footed shot to be saved in the center.  Immediately, there it is midfielder Michele Pazienza seeing his chances to score and without hesitating defeat Handanovic with a right footed shot in the center, nothing to do for Handanovic.

Referee Mazzoleni giving the first yellow card of the match in the 39th minute to Bologna defender Andrea Mantovani for a foul on Inter forward Icardi.

There you go, Inter reacting in the 63rd minute taking back the lead.   An assist by midfielder Hernanes to forward Icardi defeating Bologna goalkeeper Curci with a right footed shot in the top right corner.  It’s the 6th goal for Icardi this season.

What a rollercoaster!  Bologna equalizing again in the 73rd minute!  It is forward Panagiotis Kone to equalize with a right footed shot in the bottom right corner.  It’s the 5th goal this season for Kone.

Mamma mia!   You won’t believe this one.  Inter getting their first penalty this season!  Referee Mazzoleni grants the penalty in the 83rd minute conceded  by Bologna defender Mantovani after bringing down Inter forward Rodrigo Palacio.  Taking the penalty spot is forward Diego Milito, and while the fans were ready to shout the goal, PUFF!!!! Bologna goalkeeper Curci saves Milito’s right footed shot in the center! 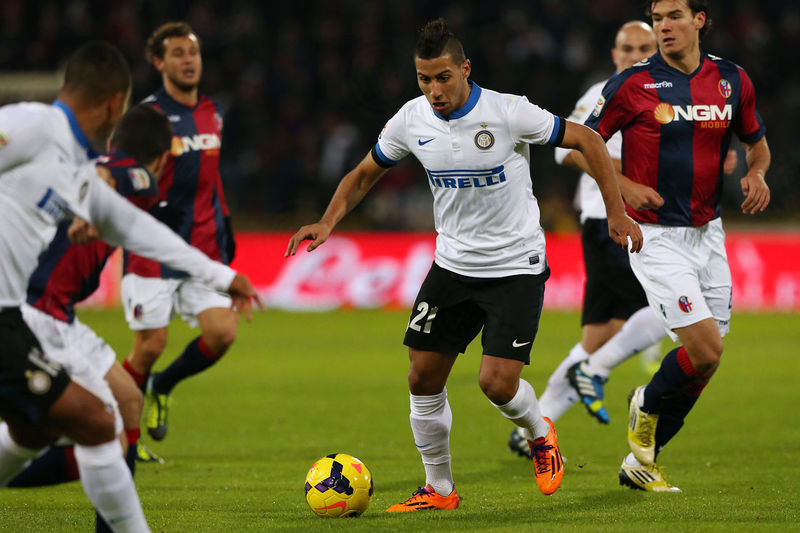 Click the video to watch the highlights of the game Inter vs Bologna on Saturday 5 April 2014, Giuseppe Meazza Stadium, Milan, Italy, Serie A Week 32