Italy made their debut in the 2014 FIFA World Cup in Group D against England with a victory.  Good news is that Italy Head Coach Cesare Prandelli recovered first goalkeeper Gianluigi Buffon and is now defending Italy. Bad news is that Italy lost the game and now risking qualification to the next round.  The passing will be decided in the next game against Uruguay on June 24.  Credit to Costa Rica playing better, tough to admit it, but that’s the truth.

Current Standing after this match in Group D:

I have goosebumps just watching the Azzurri making their entrance to the pitch!   Wow, close up for each player during the National Anthem “L’Inno di Mameli.”  All Italy putting their face in forward Mario Balotelli to lead Italy.

Game on…. Referee whistles the start of the game!  Let’s roll the ball…

Oh oh… in the 2nd minute, Costa Rica already sending the alarm by challenging Italy goalkeeper Gianluigi Buffon..  Midfielder Oscar Bolanos with a right footed shot getting the assist by Bryan Ruiz, and there it is Buffon to save in the center!

Come on Italia!!!!!   In the 6th minute, Costa Rica defender Oscar Duarte commits a foul on Italy midfielder Claudio Marchisio attempting to stop him by holding him…. oh well..

Come on Italiaaaaa, the fans increasing their chants for Italy with the classic “Po, po, po, po.”

Uffa!!!!!  In the 14th minute, there is Italy defender Ignazio Abate caught offside after getting the pass by midfielder Daniele De Rossi.!!!  I am so nervous now… come on Italiaaaa

In the 15th minute, corner for Costa Rica conceded by Italy midfielder Claudio Marchisio, and Mamma miaaaaa hello, hello, hello, there it is goalkeeper Buffon punching the ball away clearing danger!!!  Yes, that’s my Gigi!!!!!!

Another corner for Costa Rica in the .. OUCH!!!!!!  Hello,  in the 19th minute, Costa Rica defender Oscar Duarte with a kick and the ball hitting the face of defender Giorgio Chiellini bringing him down…. uff…. well, Chiellini is ok…

In the 25th minute, Balotelli is caught offside after the assist by midfielder Marchisio!

In the 27th minute,  so close…. from a long distance midfielder Thiago Motta attempts a right footed shot missing the target to the left…..  but good, let’s keep pressing.

I am fainting!!!!   Hello,,, in the 31st minute, Balotelli  getting the assist by midfielder Andrea Pirlo  and all alone making a run  having even time to accommodate the ball and the final right footed shot missing the target while Costa Rica goalkeeper Keylor Navas anticipates trying to block Balotelli…  Mamma mia, Balotelli cannot believe his luck and hold his face with both hands…..

Woooo!  In the 33rd minute, guys, a right footed shot missile by Balotelli and going straight to the arms of goalkeeper Navas in the center !!  The assist is by Thiago Motta!!!

In the 35th minute a clash between Italy defender Daniele De Rossi and Costa Rica defender Junior Diaz both on the ground now….  game continuing …. no bad intention, accidental clash….

In the 37th minute, a long right footed shot by midfielder Bolanos getting the assist by defender Michael Umaña while goalkeeper Buffon goes to the left to clear the ball!!!

Protests going on in the 42nd minute for a contested foul……

NOOOOOOOOOOOOOOO  In the 44th minute, Costa Rica opening the score with forward Bryan Ruiz defeating goalkeeper Buffon with a headed shot in the bottom right corner!!!!  This is just incredible and I am about to collapse!  Closeup showing coach Cesare Prandelli upset after the goal while the joy by Ruiz and Costa Rica fans is all over the place….

In the 49th minute, Italy defender Ignazio Abate concedes a corner….  Bolanos serving the assist following the corner to defender Giancarlo Gonzalez missing his headed shot to the right….

Wow, In the 52nd minute, a right footed shot from a free kick by Andrea Pirlo and goes straight to Costa Rica goalkeeper  punching the ball away with both hands.

Time running by…. Italy must RUSH to score…   goals are needed!!!

In the 59th minute, there is another danger created by Bryan Ruiz… luckily Joel Campbell is caught offside.

In the 62nd minute, Cassano’s right foted shot is blocked!!!!!

First yellow for Italy is for forward Mario Balotelli after a foul on Costa Rica defender Junio Diaz.

Time running by and Italy still not scoring….. 10 more minutes to go….. this is just unacceptable.  wake up Italyyy

Uffa.. what  a luck!!!  In the 82nd minute, the assist by Cerci to Lorenzo Insigne missing the target  with his right footed shot going too high.

I am almost collapsing…  wake up Italy… 5 more minutes and cannot believe Italy being down by a goal!!!!!  not even scoring!  hellooooo come on Italiaaaaaaa

In the 86th minute.. hello…  Cerci offside after the assist by Cassano!

Say no more, this it… Referee whistling the end of the game..  what an upset!!! 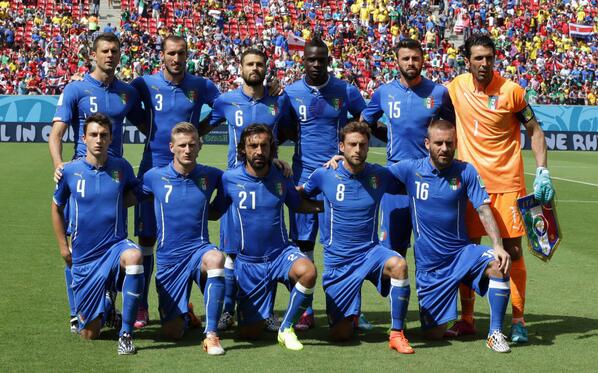 Italy fans rooting for the Azzurri at the Arena Pernambuco