A miracle for Salernitana remaining in Serie A despite losing the Serie A Week 38 game against Udinese on Sunday 22 May 2022 at the Arechi Stadium in Salerno, Italy.  Salernitana remain in Serie A with 31 points just a +1 point lead over Cagliari with 30 points after their goalless draw with Venezia.  The joy for Salernitana Coach Davide Nicola running all over the stadium thanking the fans for their continuous support.  Another season in Serie A!

The party is at the Arechi with players and fans archiving the defeat but celebrating their stay in Serie A next season!. Udinese honors the championship with an excellent match and ends the season at 47 points.

Udinese opened the score in the 6th minute. Gerard Deulofeu defeated Salernitana goalkeeper Vid Belec with a right-footed shot to the bottom left corner. The assist is by Iyenoma Udogie.

👉Salernitana 0 – 1 Udinese, 6th minute, goal by ⚽️ Gerard Deulofeu for @Udinese_1896 with a right-footed shot to the bottom left corner. The assist is by Iyenoma Udogie. https://t.co/nMdhgOeX7z

Udinese increased the score in the 34th minute. Ilija Nestorovski with a headed shot to the top right corner. The assist is by Nahuel Molina.

👉Salernitana 0 – 2 Udinese, 34th minute, goal by ⚽️ Ilija Nestorovski for @Udinese_1896 with a headed shot to the top right corner. The assist is by Nahuel Molina. https://t.co/2NDGRnsnGZ

Salernitana are humiliated. Udinese scoring another goal in the 42nd minute. Iyenoma Udogie with a right-footed shot to the top right corner.

Udinese with a poker in the 57th minute, the goal by Roberto Pereyra with a right-footed shot from to the bottom left corner. The assist is by Ilija Nestorovski

👉Salernitana 0 – 4 Udinese, 57th minute, goal by ⚽️ Roberto Pereyra for @Udinese_1896 with a right-footed shot from to the bottom left corner. The assist is by Ilija Nestorovski https://t.co/zA4QgA9PYZ

Stats before the game. Salernitana and Udinese have never drawn in Serie A; after two victories for the Bianconeri in 1998/99, Salernitana won the reverse fixture of this campaign, last month (thanks to Simone Verdi’s goal in injury time last 20 April).  Udinese have won four of their last five away matches against newly promoted teams in Serie A (L1), as many wins as in the previous 14 (D4 L6). Thanks to four wins and three draws, Salernitana have remained unbeaten in their last seven Serie A games: the last newly promoted team to go on a longer such run in Serie A was Verona in 2020 (9 games). Salernitana have gained seven points in their last three home league games, as many as those won in the previous 12 (W1 D4 L7). Udinese have lost two of their last three league games (D1), as many defeats as they have suffered in their previous 11 games in the competition (W5 D4). Udinese have recorded two wins and two draws in their last four away league matches; the Bianconeri have not remained unbeaten in five consecutive away matches in Serie A since January 2018. 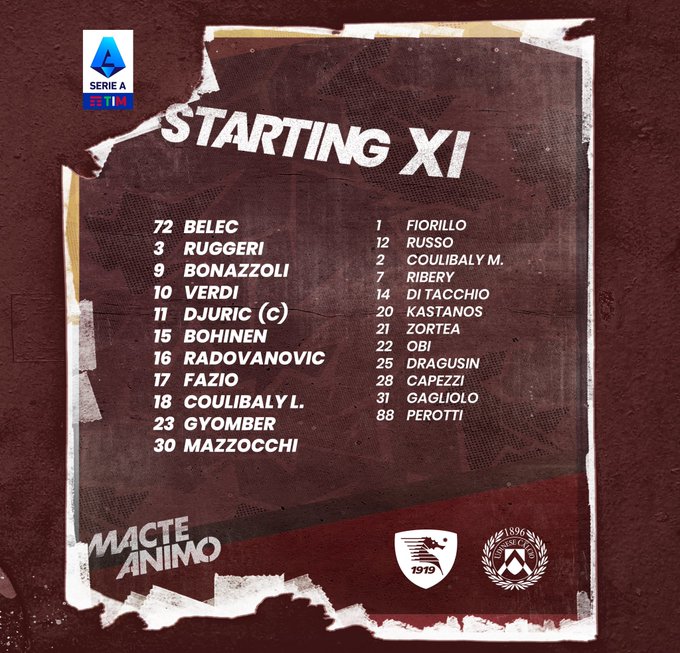 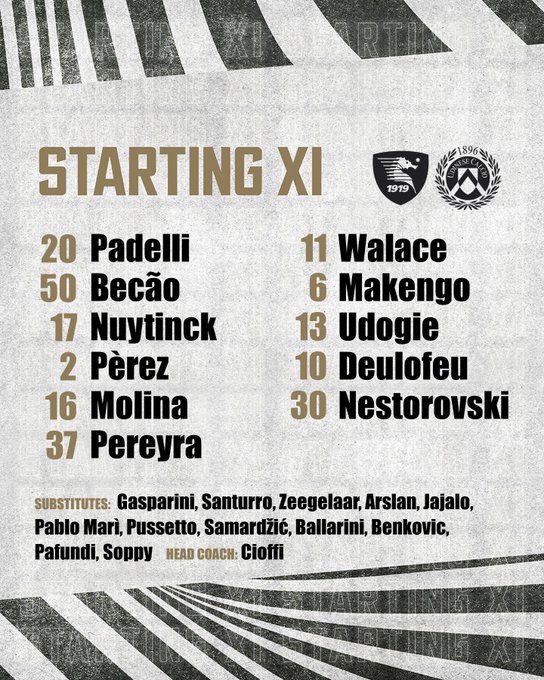 👉First half is over. Salernitana 0 – 3 Udinese

Salernitana REMAIN in Serie A!!

✅ Here are Salernitana vs Udinese official starting lineups for the Serie A Week 38 game on Sunday 22 May 2022 at the Arechi Stadium in Salerno, Italy at 21:00.

AC Milan win the 2021-22 Scudetto after defeating Sassuolo at the Mapei Stadium. AC Milan waited 11 years to win their 19th Scudetto. The last time was back in 2011. The final score was Sassuolo 0 – 3 Milan thanks to the goals by Olivier Giroud with a brace and Franck Kessié. Milan ended the season with 86 points being +2 points ahead of Inter in the second position with 84 points. Milan with 86 points have never achieved more in a Scudetto triumph. Merit to the club, players, Coach Stefano Pioli, winning the first Scudetto of his career. Standing ovation for all AC Milan fans worldwide. 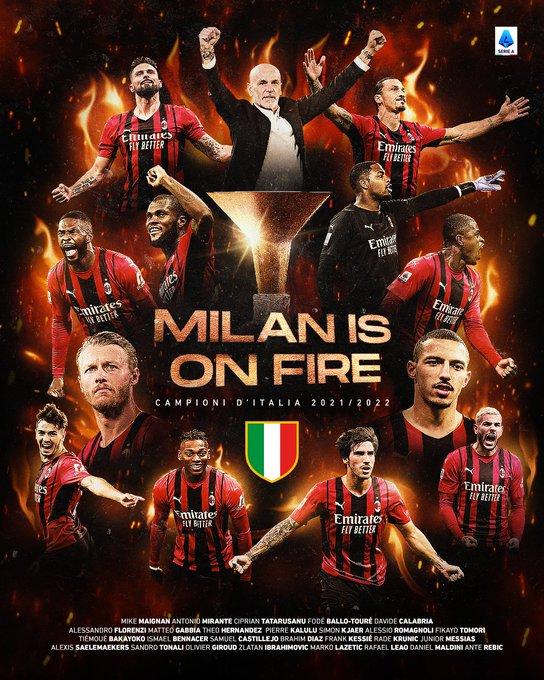 ✅ The verdict is out for Venezia, Genoa, and Cagliari are relegated to the Serie B.

✅ Cremonese and Lecce are promoted from the Serie B to the Serie A next season.

Up to Week 38 the Race for the Scudetto 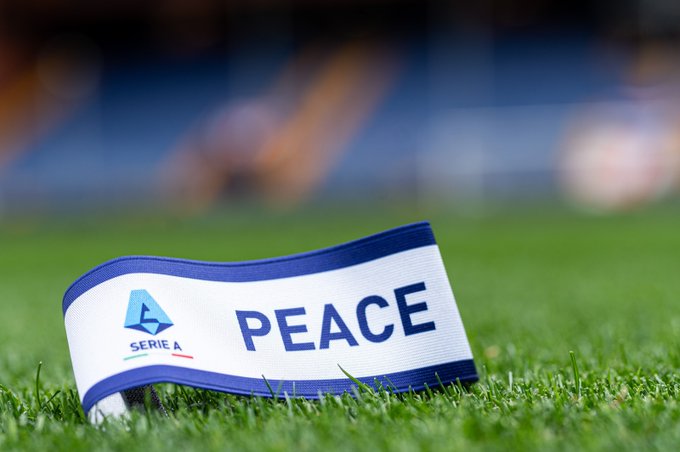 Roma crushed Torino with a 0-3 at the Olimpico di Torino.  The victory secured a post for the UEFA Europa League next season.  The goals scored by Tammy Abraham with a brace and Captain Lorenzo Pellegrini.

Genoa, sadly, relegated to the Serie B, lost their last home game at the Luigi Ferraris Stadium defeated by Bologna.  Bologna won thanks to the goal by Musa Barrow in the 66th minute for the final Genoa 0 – 1 Bologna.

Fiorentina defeated Juventus at the Artemio Franchi Stadium.  Fiorentina finished the Serie A 2021/22 campaign in the first seven positions and next season will play in European competition for the first time since 2016/17, when they were eliminated in the round of 32 of the Europa League.  Juventus already qualified for the Champions League next season.

Spezia saved to remain in Serie A. Napoli secured their post in Champions League next season. Napoli defeated Spezia at the Alberto Picco Stadium. Napoli kept a clean sheet in both of their last two league games, and have not done so in three in a row since last October (four). A chaotic moment with the game being interrupted about 10 minutes due to some disturbances between fans in the stands in the first half. Napoli ends the season in the 3rd position with 79 points in the standings. Napoli did not do better than the 91 of the 2017/18 season. Spezia will play his third consecutive season in the Italian top league.

👉 Results from Serie A Week 38

– AC MILAN, 1st position with 86 points and a positive goal difference of +38

– INTER, 2nd position with 84 points and a positive goal difference of +52

– NAPOLI, 3rd position with 79 points and a positive goal difference of +43

– JUVENTUS, 4th position with 70 points and a positive goal difference of +20

– LAZIO, 5th position with 64 points and a positive goal difference of +19

– AS ROMA, 6th position with 63 points and a positive goal difference of +16

– GENOA, 19th position with 28 points and a negative goal difference of -33

👉This evening the verdict of the longest Derby in history
The Scudetto
Milan and Inter, a season in the final match
At 18, Rossoneri in Reggio Emilia against Sassuolo: a draw is enough
Nerazzurri at San Siro with Samp pic.twitter.com/lnWAXUzRqn

👉Gravina to Tuttosport: “I take Chiellini and change football”

👉Gravina to Tuttosport: “I take Chiellini and change football”

✅ Here are Salernitana official called up players by Coach Davide Nicola for the Serie A Week 38 game Salernitana vs Udinese on Sunday 22 May 2022 at the Arechi Stadium in Salerno, Italy at 21:00. 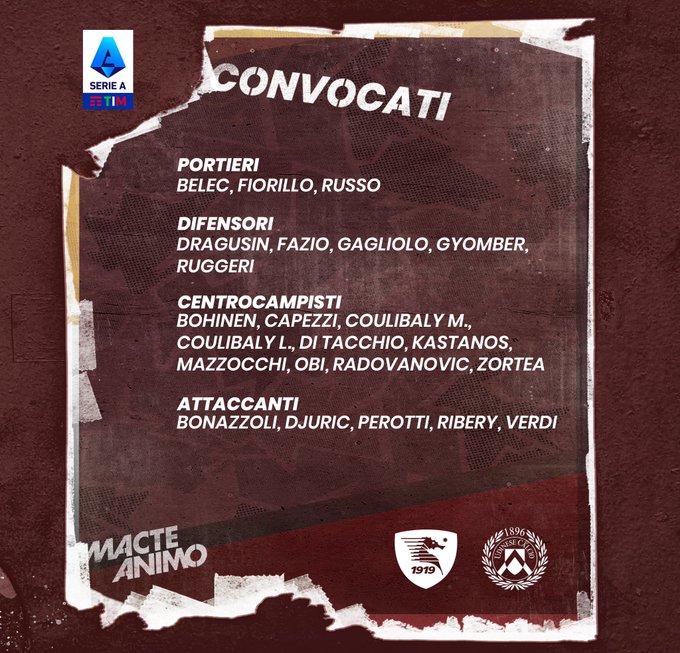 ✅ Here are Udinese official called up players by Coach Gabriele Cioffi for the game against Salernitana: